This is the first in a series of interviews with Washington Barnstormers for Pete – folks who traveled across the country to support Pete at the Liberty and Justice dinner in Iowa on November 1st. It was a life-changing experience for many, and galvanized support for Pete in Iowa – a truly pivotal moment in the campaign! We’ll be bringing the stories of people who attended the LJ ’19, and future Barnstormers events, to you in future posts.

In this post, student volunteer Madison Boesch is talks with Barnstormer Sue Averill, who went with her husband to The Liberty and Justice conference on November 1st in Des Moines, Iowa. Sue is a retired nurse and avid Pete supporter from Seattle.

Madison [interviewer]: When you were growing up were you raised in a family or community involved in politics?

Sue: It’s funny, I’m sixty-four and my dad was a career army and lot of times military [people are] very conservative. They always used to be Republican; I don’t know if they still are but my dad was, always.

He was a disciplinarian and “hard line.” You do things the “right way” and he was very, very, very conservative and socially conservative. He was born in 1920 and and that was just kind of how he was raised I guess. During our younger years I didn’t know anything about that–just he would rage periodically about you know whatever was going on. And by the time the eighties came around and Reagan was in power–My dad hated Reagan with a passion; he would yell at the television and he would grab the TV remote and muted it whenever Reagan came on and he turned Democrat because of Reagan. I asked my mom one time quietly on the side so does this mean you’re going to be a Democrat too and she said, “Oh, Honey I’ve been a Democrat since Roosevelt.”

So you know politics was never something that we could agree on or discussed, but the rules were so different then between husband and wife. But my mother, as she got to be an elderly woman, got so outspoken. She wanted to March on Washington in her wheelchair. She was a huge Obama supporter. In her nursing home she had an Obama sticker oh her wheelchair and pictures in her room. She got all the staff to be behind Obama and they had a election night party and all kinds of things. She got much more politically active in her seventies eighties and even at ninety.

I was just five when Kennedy did his inauguration speech with “ask not what you what your country can do for you, ask what you can do for your country” and that really, really,  really resonated with me. Well it just touched me even as a little kid, so I was always liberal and you know a “change the world” kind of a person from early on.

I’m all in for Pete and this is the first time in my sixty-four years that I feel that way – and that so much hangs on this choice that we’re about to make.

I started doing a lot of international volunteering [but] I have never been involved in politics. I’ve never donated to a candidate until Pete. I’ve never promoted a candidate until Pete. I mean, I voted but for the last twenty years I’ve mostly been out of the country during the campaign cycle, but this time I’m not working internationally [and] the election is so important, and I think we have an amazing candidate in Pete. My husband and I went as Barnstormers to [Iowa] and I have yard signs, I’ve got buttons, I’ve got bumper stickers–I’m all in for Pete and this is the first time in my sixty-four years that I feel that way – and that so much hangs on this choice that we’re about to make.

Madison: What drew you to Pete as a candidate?

Sue: The first thing that struck me was just seeing him on some show back in the spring and thinking, “Wow, he is really young… Wow, he is so smart, he’s so well spoken, and then he started talking about unity and talking about not vilifying the other side. not being angry at the people who choose to vote or participate in a different way, but invite them to the right side of things.

He has a very different approach, and the more I’ve watched him and evaluated him against the other candidates…he’s never got his finger in the air screaming and pointing; he’s a gentle person and his policies are bang on; you can tell they’re well researched.

All of the democratic candidates are within a narrow band of each other, in terms of what their ideas are, but for me the difference is that Pete is a unifier and he talks about how we need to come together to govern and none of the others are talking that way. That’s what really speaks to me the most, that message of the unity of belonging of coming together and being being good to each other and that it’s fine to attack ideas but not people.

That’s what really speaks to me the most, that message of the unity of belonging of coming together and being being good to each other and that it’s fine to attack ideas but not people.

Madison: You mentioned that you and your husband went to Des Moines, what was that like, barnstorming?

It’s going to rank up there in the top, I don’t know, ten things I’ve ever done in my life.

Sue: It’s going to rank up there in the top, I don’t know, ten things I’ve ever done in my life.

It was all this energy and not just Pete people. There were 3000 something Pete people there, but all of the other people who came for it were obviously passionate Democrats. And okay, somebody likes Kamala somebody likes Liz [Warren], somebody likes Bernie, but everybody would say, “Oh yeah, you know, Pete, he’s great; he’s so smart” and there was just such positive energy.

When we first got there and we were walking from our hotel over to where everybody was gathering some Uber was driving past us, [he] turns the corner and the guy’s got his arm out the window honking with one hand, the other arm was out the window yelling “Pete, Pete, Pete!” There was just this incredible energy about all of it and you saw somebody wearing a Pete button or Pete hat or whatever and they were instantly family; you can walk up and just start a conversation, and that happened over, and over, and over again.

Chasten was everywhere just smiling and taking pictures with everybody who wanted to. Pete’s mom and Chasten’s mom were hanging out. The thing inside the arena was just wonderful. I don’t know if you’ve seen the video, but it was it was incredible to be part of. [The entire] end of the stadium was all chanting for Pete.

And then talking with people in Iowa–talking with the waitress, and talking with people at the table in a restaurant next to us, and knocking on doors and talking to people about Pete. [It was] really neat to talk to Iowans about him and about their involvement in the process.  We met Amy Klobuchar on the plane [and when] we were waiting for the plane to come home, Cory Booker came walking with his movie star girlfriend and stopped and chatted with us. We said, “You know, Cory you’re wonderful. We just think you’re the greatest; we’re for Pete, but we think you’re wonderful.” And he asked to take a selfie with us. I mean there was just a super positive energy around.

Madison: Is there anything from your trip that you remember clear as day?

Sue: We were in a restaurant just down from the the arena, maybe the day after, and we were sitting waiting to order and we had our Pete shirts on and there was a table right next to us and this lady started up a conversation.

“Why are you guys for Pete?”

She’s a local and I had on a name tag with my first name and that we had come 1756 miles from Seattle for Pete and she said, “Oh, I’m Sue too. I’m a nurse too…” So all of a sudden we just started bonding; she had been a nurse for 40 years just like I had, and her husband was sitting there scowling. He obviously was not wanting to have any part of this conversation so we chatted back and forth and I said something about the sandwich that I had been told to order, and we went back to our meal.

I see the husband ordering the sandwich I got and said, “You’re taking my idea for my sandwich, huh?” And he looks up at me and then he kind of smiled. I said “Am I going to get you to to start taking my idea about Pete?” And he just let out with a smile and he started talking and [he] hadn’t made up his mind, but you know, Pete seemed like a good guy… and it just opened up a conversation. The wife, Sue, and I exchanged phone numbers.

They’re going to be in Seattle next September and she’ll give me a call and we can get together. We just became best friends just over a a one hour meal and it was because of Pete.

Madison: Wow, that’s pretty cool! Thank you so much for sharing your experience. Is there anything else you’d like to say? 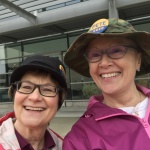 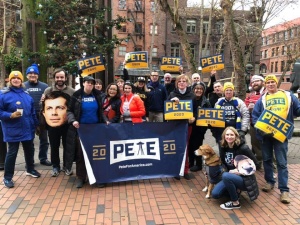 Pete Is On the Ballot in WA!

An Evening with Pete Buttigieg – Seattle 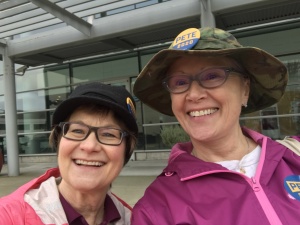